“The team at Espresso has been great and very supportive. They’ve offered us lots of helpful ideas at the margin to make Vidrio more successful.” 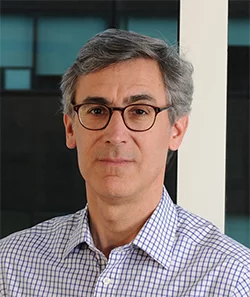 Mazen Jabban’s path to becoming the founder of a tech company wasn’t necessarily a direct one. He’d spent years as the founder of a successful alternative investment fund when, in 2008, something changed. His firm was approached by a client who wanted to invest in one of his funds. As part of the due diligence process, the client — a large institutional investor — got a first-hand view of the proprietary software the firm had created to run its business. Impressed, the client asked if they could have access to the software to use in their own business.

It quickly became clear to Mazen that there was an opportunity to commoditize the software he’d developed. So, over the next few years his team re-engineered it from an in-house system to a hosted, multi-client platform. Then, in 2011, he spun it out into a new business called Vidrio, a New York-based company that provides institutional investors with investment management solutions on a single platform. Later that year, he hired Federico De Giorgis to come on as the company’s president, while assuming the role of chairman and CEO himself.

A desire for capital efficiency

Early on, Vidrio was entirely self-funded. Eventually, it took some outside equity capital from a client that liked the work that they were doing. While the team put the equity to good use, they recognized that it came with a cost. “Equity certainly has its place in any financing strategy, but by its very nature it’s an expensive form of capital,” says Federico. “We knew we needed to be thoughtful about when and how we used it.”

After a few years, Vidrio had reached the point where having some additional short-term working capital would really help fuel the company’s next phase of growth. Specifically, the team was anxious to ramp up their sales and marketing efforts to help accelerate their go-to-market strategy. And while they certainly could have secured additional equity, given their desire to be capital efficient, they began to explore other options, including venture debt.

“At that time, we were talking to a number of outside advisors about Vidrio’s progress and growth ambitions,” says Federico. “It was through that process that we became aware of venture debt and of organizations like Espresso Capital. We like venture debt because it’s ideal for fueling growth, it’s much more flexible than equity, and it has more attractive rates.”

When it came time to choose a lender, Federico says there were several reasons why they chose Espresso. “Part of the appeal of Espresso is its revolving debt structure, whereby you can draw down funds from your credit facility at your discretion and pay the facility down as you go,” he says. “More importantly, we only work with people who we know and trust. Espresso took the time to get to know us and understand our business. In the process, we got a clear sense for what they’re like to work with — both in good times and bad — which was very reassuring.”

Federico says he was also impressed with the experience and expertise of everyone he met at Espresso. “They were very thoughtful,” he says, “and they demonstrated greater creativity than any of the other lenders we spoke to in terms of meeting our specific needs.”

The road to growth

While it’s still early days, Vidrio plans to use the capital it raised from Espresso to fuel its sales and marketing efforts, a part of the business that hasn’t historically been allocated many resources. For many years the team was focused on client execution, while sales and marketing efforts were largely opportunistic, with many of the company’s new customers sourced through word of mouth.

To accelerate growth and build off of the strong foundation that they’ve already established, Federico plans to add headcount in sales and marketing. They’ve also been working on refreshing their brand identity and recently revamped their website. Plus, they plan to invest in content marketing to drive inbound leads.

While the relationship is still quite young, Federico says that every touchpoint he’s had with Espresso has been positive. “Things are running smoothly,” he explains. “The team at Espresso has been great and very supportive. They’ve offered us lots of helpful ideas at the margin to make Vidrio more successful and we look forward to deploying the capital they’ve lent us to help supercharge our growth.”